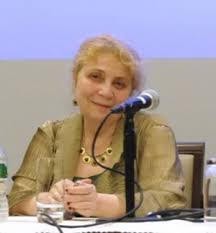 Catharine Nepomnyashchy, Ann Whitney Olin Professor of Russian Literature at Barnard, died on March 21.  She is survived by her daughter Olga Nepomnyashchy, her mother Jo-Anne Theimer, and her brother James Theimer and sister-in-law Sunnie Noellert. Cathy Nepomnyashchy was a brilliant scholar, thinker, teacher, mentor, and administrator.  Her intellectual energy was a force of nature.  She was an agent of change in the institutions and programs she served, the scholarly fields she pursued, and no less in the hearts and minds of the many people she knew.

Cathy Nepomnyashchy was a masterful teacher and a curricular visionary.  Her regular repertory included all periods of Russian literature and all forms of Russian culture, including popular culture.  She collaborated in the classroom with colleagues in history, political science, and human rights.  She masterminded interdisciplinary and cross-cultural courses.  She taught on-line courses.  This past summer she co-taught a Columbia Global Programs course on Post-Socialist Cities in which students visited Berlin, Moscow, Ulan-Bator, and Beijing, travelling part of the way by Trans-Siberian Railroad.  Her seminars in Soviet and post-Soviet literature and culture were essential to the Columbia graduate program.  And she especially loved introducing undergraduates to the work of Vladimir Nabokov.  In addition to being a superb writer herself, Cathy Nepomnyashchy had a special gift for teaching others to write lucid prose.  And she is known not just on campus but in the Slavic field at large as a loyal mentor who forged lasting bonds and who never let students give up on what they aspired to.

In addition to chairing the Barnard Slavic Department, Cathy Nepomnyashchy served as the Director of Columbia’s Harriman Institute from 2001 to 2009.  She drew academics, writers, chiefs of state, ambassadors, public intellectuals, conceptual artists, dancers, and others into action at the Harriman Institute.  She broadened the geopolitical range of the institute to include Central Asia and Georgia and she made it a center of interdisciplinary inquiry.  She was a wonderfully creative administrator.

The recipient of the AATSEEL Award for Outstanding Contribution to the Profession (2011) and the Harriman Institute Alumna of the Year award (2013), Cathy Nepomnyashchy has been honored for her achievements in the field.

As a scholar, Cathy Nepomnyashchy’s range was broad.  She published on Pushkin, on great writers of the Soviet period, on émigré Russian writers, on women writers, on Jane Austen in Russia, on ballet, on popular culture and new media.  She is known especially for her work on Abram Tertz (Andrei Sinyavsky): Abram Tertz and the Poetics of Crime, which appeared in English in 1995 and in Russian translation in 2003, and a translation with Slava Yastremski of Tertz’s Strolls with Pushkin.  She coedited “Under the Skies of My Africa”: Alexander Pushkin and Blackness, a volume that inspired an editorial by Henry Louis Gates, Jr., in which he asked “was the father of Russian lit a brother?”  Mapping the Feminine: Russian Women and Cultural Difference, another coedited volume, was a landmark in the study of writings by and about women.  In each of her books she put a feature of Russian literary life into play in a way that expanded the horizons of our field.

For the past few years Professor Nepomnyashchy had been at work on a book manuscript, Nabokov and His Enemies: Terms of Engagement.  In it she explores how Nabokov capitalized on writers and thinkers whom he took pleasure in trashing—among them Sigmund Freud, Jane Austen, Agatha Christie, Boris Pasternak, and Edmund Wilson.  This leads her to “suggest a way of rethinking authorial agency in the construction of literary texts.”  In Cathy Nepomnyashchy, Vladimir Nabokov met his match.  This project played to her many strengths: her literary sensibility, her erudition, her critical sophistication, her penetrating intellect, and her delight in the mysteries of the human psyche.

The literature, culture, and society of Russia and its neighboring lands were not just a field of study for Cathy Nepomnyashchy.  She lived and breathed this world.  Together with Nadezhda Azhghikina, a Russian journalist and dear friend, she published an eye-witness account of the 1991 coup in Moscow, Three Days in August.  (It appeared in Russian in 2014.)   Cathy Nepomnyashchy travelled extensively.  She was an astute observer of the societies and cultures she visited.  Cathy took joy in sharing these experiences with her travelling companions, her husband Vyacheslav Nepomnyashchy, who died in 2011, and their beloved daughter Olga, now sixteen, who accompanied her mother on her recent trip across Siberia.

Cathy Nepomnyashchy’s colleagues, students, and friends in the Columbia Slavic Department cherish her memory.  We are extraordinarily proud of the legacy she leaves behind.

A website that houses Cathy Nepomnyashchy’s writings and celebrates her life and work has been set up by her former students Ani Kokobobo and Emma Lieber.  Please see: http://www.cathynepomnyashchy.com/

If you would like to post a tribute on that site, please send it to: [email protected]

A memorial service will be held for Professor Catharine Theimer Nepomnyashchy on Friday, October 2, 2015 in the James Memorial Chapel at Union Theological Seminary (3041 Broadway at 121st St). The service will be followed by a reception at the Diana Center, Barnard College (3009 Broadway at 119th St). All are welcome to attend.

Professor Nepomnyashchy has been a cherished member of the Harriman Institute, Columbia University, and Barnard College communities since she enrolled as a doctoral student in Columbia’s Slavic Department in 1973. Nepomnyashchy was the first woman to direct the Harriman Institute (2001 – 2009), and was honored as the Institute's Alumna of the Year in 2012. She was a member of the Barnard Slavic Languages Department since 1987, and its chair since 2000.